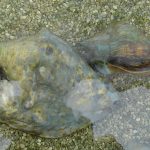 A study just published in PLOS One sheds new light on the Calusa tribe of southern Florida and how they used their discards. A hunter-gatherer tribe who subsisted primarily on seafood, the Calusa used the discarded shells from shellfish to form habitable islands.

Mound Key was the capital of the South Florida Calusa when the Spanish first interacted with them in the 1500s. Thompson et al. ran a series of radiocarbon dating tests on the midden (or discarded trash) on Mound Key and discovered that the island was deliberately formed and shaped from discarded shells and bones, an early form of landscape engineering.

This site uses Akismet to reduce spam. Learn how your comment data is processed.