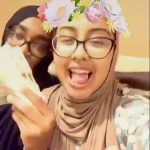 We all say Not in My Town, but it happened in My Town early Sunday morning. A murder happened. Seventeen year-old Nabra Hassannen was walking back to her mosque after eating at the local IHOP Sunday morning with a small group of her friends when a motorist confronted them for some reason. The teens ran back to the mosque, but Nabra was left behind.

Her mother said she wasn’t used to wearing the abaya. She only wore it for religious holidays, and she may have tripped over the long dress. Whatever the reason, she didn’t make it. Facts are a little sketchy still, but twenty two-year-old Darwin Martinez Torres was arrested yesterday and charged with her death. Her mother told the news that he beat Nabra with a metal bat and dumped her body in a pond. I drive by that pond virtually every time I go anywhere.

It’s Ramadan, a holy month for Muslims and one where they fast from sunrise to sundown. The teens had been to midnight prayer at the ADAMS Center, home to the largest Muslim congregation in Northern Virginia, located  here in Sterling. They walked to the local IHOP to eat after prayers so they could face another day of fasting.

For some reason when I read about Nabra’s murder last night, I fell apart. I didn’t know the girl. I didn’t know the family. I’ve never been to the ADAMS Center although I have been invited. My husband asked me if it was because it was so close to us and I was home alone when it happened. Maybe, but I’ve heard of murders and assaults close to me before. Somehow though, when I read the news last night, I cried and cried hard. A 17-year-old girl who had just finished praying and indulging in some innocent fun with her friends was brutally murdered on Father’s Day.

I haven’t written much on this blog since the election. I’ve struggled with how to talk to people I know are supporting the Trump administration. If we are to get anywhere we must not stop talking to one another, but it’s been hard to talk civilly to people that are supporting the hate-mongering coming from the right-wing often in the name of some Christianity that Christ wouldn’t recognize if he walked among us today.

When we rant about Sharia law or refuse to allow mosques to be built in our neighborhoods or support bans targeted at keeping a particular religion out of this country, we are supporting oppression and hatred and taking a stance fundamentally opposite to the freedom of religion this country was founded on. Good people can make poor choices and support hatred for seemingly rational reasons, but it is still a support of  hatred, no matter the spin. It doesn’t necessarily follow that this murder is a result of the climate of fear and hatred that is ongoing, but we will certainly never know that it’s not connected and it’s really hard not to believe that we as a nation failed this family.

I’m not naive enough to believe that we will ever live in a society that is all pollyanna and non-violent sunshine, but I hope that we can pull back from the white supremacy and minority bashing that is roiling us and vote out anyone in power who is actively engaged in appealing to our lesser angels not our better ones.

I’m home from my annual writer’s retreat and so energized to get writing. I let this blog go quiet in favor of other projects and lack of time so I’m renewing my commitment to posting on Story Currents in a timely fashion.

If you are interested in Cons, ConCarolinas is a wonderful convention in Charlotte. If you are a writer, I will post more later on founding a writing group. I can’t recommend it highly enough!